Tchaikovsky’s name is closely associated with ballet. In fact he wrote the score for 3 of the most famous and most performed ballet’s in the world. Swan Lake was the first of these. (The others are Sleeping Beauty and The Nutcracker). From the opening of the Swan Lake Suite, Tchaikovsky’s mastery of melody and movement is evident as it takes you away on a wave of feathery lightness.

The Swan Lake Suite is a 25 minute selection of music from the ballet — not the whole score which lasts up to 2 hours. It begins with a beautiful violin-fuelled ‘scene’ which sets the tone of the whole suite with it’s building wave-like melodies. The whole piece is indicative of Tchaikovsky’s talent with melody, harmony and his ability to adapt his compositional talents to theatrical settings. (He also composed a number of operas).

It’s hard not to see dancers when you listen to this music, as it is so entwined with movement. But it is the image of birds and water that wins me over. Imagine floating above a small urban lake, home all year round to many water birds. Looking down you could see a formation of ducks moving across the glass-like surface of the lake, ripples extending in a trail behind them, getting smaller and smaller until disappearing. Other birds join them, they circle about within the group of ducks as if at a party, some birds cluster together, some birds pair up, and others wander off on their own, all in the choreographed dance of nature. 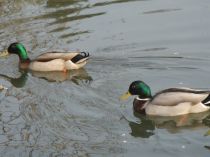 While it is all sunny and sublime on the surface suddenly our focus swerves from above to below and we see what appears to be a graceful glide through the water is in fact the result of a furious pumping turmoil of legs beneath the water. Once you know that churning darkness is there the scene on the surface can never look the same.

Watch a scene from the ballet — Dance of the Little Swans

Like many famous works Swan lake was not well received when it premiered in Moscow in 1876, many thinking the music too complicated for a ballet. Nevertheless that never stopped it being produced and it has gone on to be the most performed ballets. Strangely in the 1950s during Stalin’s rule of soviet Russia, it was given a new ‘happy’ ending and there are now 2 versions of the ballet.

Tchaikovsky too had to fight his way into prominence. A career as a musician wasn’t an option in Russia when he was growing up so he was trained to be a civil servant. He persevered and convinced his father to help him take music lessons and learn theory in his spare time. In 1862 when he was 22,  he became part of the first music conservatory in St Petersburg, which eventually allowed him to leave the civil service. But even when he started to find his feet as a composer there was opposition to his work from the more conservative nationalist groups (The Five) in Russia. While disappointed with these responses he continued to write and play and triumphed nonetheless to become Russia’s greatest composers.

While he may have had a hard road with some personal tragedies in his life, at least he got to enjoy his own success.

Images in order of appearance courtesy of public domain, Editor 5807 via CC